Y880 News
Admin
posted on 3 weeks ago — updated on 3 weeks ago
45
views
Hot
Facebook says it has removed adverts for US President Donald Trump's re-election campaign that featured a symbol used in Nazi Germany.

The company said the offending ad contained an inverted red triangle similar to that used by the Nazis to label opponents such as communists.

Mr Trump's campaign team said they were aimed at the far-left activist group antifa, which it said uses the symbol.

"We don't allow symbols that represent hateful organisations or hateful ideologies unless they are put up with context or condemnation," the social network's head of security policy, Nathaniel Gleicher, said on Thursday.

He added: "That's what we saw in this case with this ad, and anywhere that that symbol is used we would take the same actions." 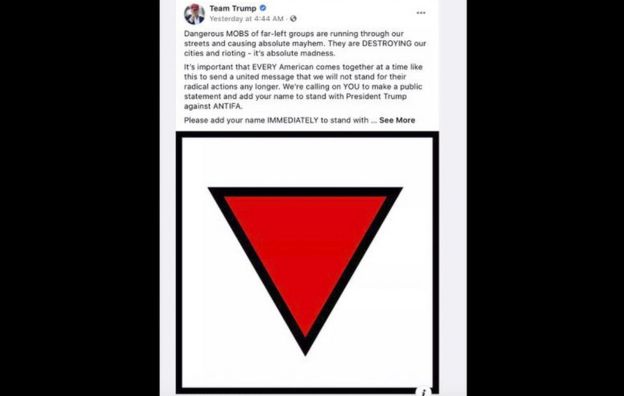 The ads, which were posted on the site on pages belonging to President Trump and Vice-President Mike Pence, were online for about 24 hours and had received hundreds of thousands of views before they were taken down.

"The inverted red triangle is a symbol used by antifa, so it was included in an ad about antifa," Tim Murtaugh, a spokesman for the Trump campaign, said in a statement.

"We would note that Facebook still has an inverted red triangle emoji in use, which looks exactly the same," he added.

Mr Trump has recently accused antifa of starting riots at street protests across the US over the death in police custody of African American George Floyd.

The president said last month that he would designate the anti-fascist group a "domestic terrorist organisation", although legal experts have questioned his authority to do so.

Antifa is a far left protest movement that opposes neo-Nazis, fascism, white supremacists and racism. It is considered to be a loosely organised group of activists with no leaders.

Most members decry what they see as the nationalistic, anti-immigration and anti-Muslim policies of Mr Trump.

A move likely to infuriate the president

This is the latest salvo in an increasingly fraught relationship between the technology giants and the White House.

Last month, Twitter put a warning on one of the president's tweets about rioting in Minneapolis - saying it had "glorified violence".

Mr Trump hit back by talking about the "unchecked power" of big tech. He said that Section 230 - a law that protects social media companies from being legally responsible for the online content of users - should be revoked.

But forget Twitter for now, Facebook is the platform that Mr Trump really cares about. The social network is where a majority of his online political advertising budget goes. The move will likely infuriate the president. It also acts as a warning that Facebook does - and will - moderate some political content.

As the 2020 election draws nearer, it's likely more and more focus will be placed on what it does - and does not - take down.

Earlier this month, Facebook employees spoke out against the tech giant's decision not to remove or flag a controversial post by Mr Trump relating to the protests over Mr Floyd's death.

The president posted a comment on the social network saying that he would "send in the National Guard" and warned that "when the looting starts, the shooting starts". But Facebook said it did not violate its company policy.

Mr Trump had tweeted the same comments, but Twitter placed a warning over the content, which it said "glorified violence".